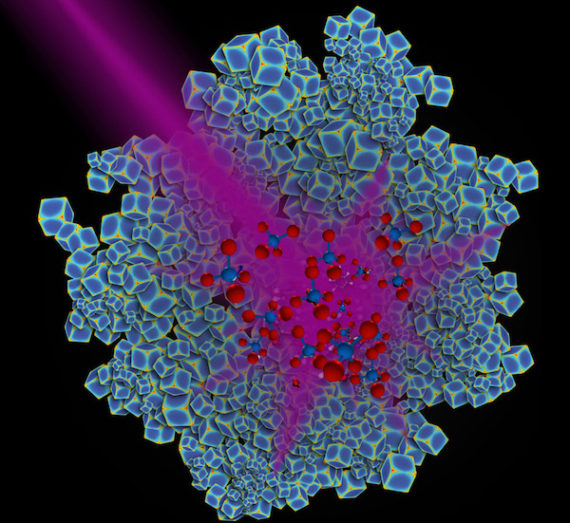 Scientists at Duke University have figured out how to tease just a little more fabulousness out of rhodium, a rare element that the jewelry finishing trade considers to be fabulous enough already. The research team has deployed rhodium in system that uses solar energy to convert carbon dioxide into methane, aka natural gas. The idea, eventually, could be to capture waste gas from industrial operations and convert it to usable fuel.

Both carbon dioxide and methane are greenhouse gases, so at first blush there doesn’t seem much to gain. However, if you look at the hazards and risks of natural gas fracking — including “fugitive” methane emissions — sourcing methane from captured waste gas starts to look pretty good.

The new Duke University breakthrough solves one of the problems that has been giving researchers conniptions for years.

Rhodium is an excellent catalyst, but it produces carbon monoxide and other undesirable byproducts when used for CO2 conversion. According to Duke, the ratio is about half methane and half undesirables.

That inefficiency makes the pathway to commercialization all the more difficult. That’s compounded by the price of rhodium, which can cost 10 times more than gold. Rhodium is also susceptible to wide swings in the global commodities market.

The Duke team seems to have solved both problems at once. Leveraging the relatively new (well, new-ish) field of plasmonics, the team was able to work with nanoscale bits of synthetic rhodium that were optimized for light near the ultraviolet range.

When exposed to light in that range, the resulting CO2 conversion leaned toward producing methane without the byproducts.

Here’s an explainer from Henry Everitt, a scientist at a US Army R&D center who is also an adjunct professor at Duke:

“Effectively, plasmonic metal nanoparticles act like little antennas that absorb visible or ultraviolet light very efficiently and can do a number of things like generate strong electric fields…For the last few years there has been a recognition that this property might be applied to catalysis.”

Among the many next steps involved in getting this thing out of the lab and into the streets, the team will be looking at ways to use natural sunlight instead of UV light.

There’s A Catch…Or Is There?

The Duke study has just been published in the journal Nature Communications under the title, “Product selectivity in plasmonic photocatalysis for carbon dioxide hydrogenation.“

If you caught that thing about hydrogenation, that refers to the use of hydrogen in the reaction.

That should send up a red flag or two because right now a primary source for hydrogen gas is methane gas. Hydrogen already has many industrial uses and demand for hydrogen will rise if the whole fuel cell thing catches on (it already has, in some sectors). Methane conversion would add yet another straw to the methane load, solar powered or not.

So, is the Duke breakthrough really all that helpful?

It could be, eventually.

Aside from fossil sources, animal waste and other types of biomass are sources of methane emissions (yes, that includes cow farts). Current research indicates that globally, domestic livestock accounts for a large portion of methane emissions so rise in demand for hydrogen could help accelerate efforts to reclaim those emissions and put them to use.

Research teams all over the globe are also busily applying themselves to the task of “splitting” water to produce hydrogen, and powering that process with solar energy or other renewables.

And, speaking of fuel cells, back in 2013 CleanTechnica covered a rather interesting study indicating that a catalyst based on rhodium and cobalt could enable fuel cells to generate their own hydrogen on the go.