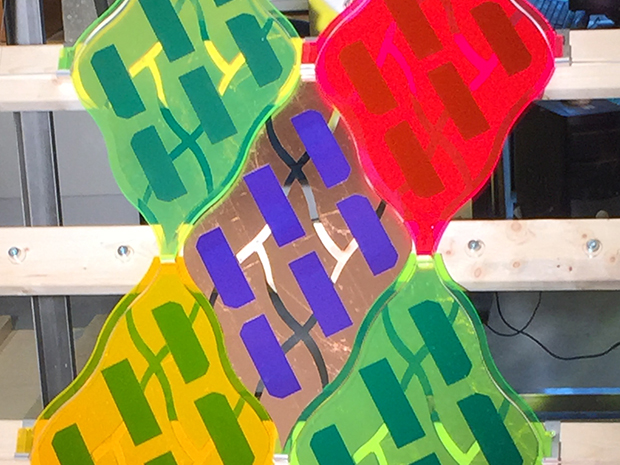 If you want your home to stand out, a flashy new photovoltaic module might be just what you’re looking for. The leaf-shaped prototype uses color and shape to redirect light to two silicon solar cells.

Researchers announced last month at the annual Photovoltaic Science and Engineering conference in Singapore that their 0.11-square-meter photovoltaic modules had achieved a record high for efficiency in converting the sun’s rays to electricity: 5.8 percent.

“[This technology could] become more attractive to architects and people involved in the building sector,” says Angèle Reinders, an industrial design engineer at University of Twente in the Netherlands.

With traditional silicon solar cells on roofs, costs can add up quickly. With that in mind, many researchers, with an eye toward commercial viability, have tried using materials that can concentrate light into one or two solar cells.

Typically, engineers place solar cells on the edges of panels and guide the light using novel materials such as quantum dots and organic dyes. For example, in research published in 2008, one group achieved 7.1 percent efficiency with four expensive gallium arsenide solar cells on the edges of a tiny luminescent solar concentrator with colored dyes. Earlier this year, a Journal of Renewable and Sustainable Energy article described research using silicon solar cells on the back of PMMA (acrylic glass) panels; those modules achieved only 3.8 percent efficiency.

Reinders favors the use of plastic because chemical processes exist to remove the PMMA and recover the electronics, so the photovoltaic modules are recyclable. In glass sheet photovoltaics, the solar cells and wires in between them end up as waste. But in order to improve the performance of medium-size solar concentrators using plastic, Reinders and her colleagues came up with new designs aided by computer simulations of different shape combinations, colors, numbers of silicon solar cells, and solar cell positioning.

Here’s how the designs work. When sunlight strikes a flat PMMA film mixed with a particular colored dye, the light reflects inside the film. Depending on the dye’s color, it adjusts the wavelength of the light so that it’s closer to the infrared range. This is advantageous because the two silicon solar cells at the bottom of the panel absorb more light in the infrared range.

The researchers tried to strike a balance between the photovoltaic module’s size and accessibility of light.

The team built a prototype—which has continued to convert photons to electrons with 5.8 percent efficiency for the past 1.5 years—by cutting each of the two solar cells into three pieces and attaching them to the bottom of films featuring a red dye. In simulations, the geometry of a rhombic shape appeared to harvest more light rays than a rectangular shape.

Sue Carter, a physicist at the University of California Santa Cruz who was not involved in the study but has designed solar concentrators for greenhouses, points out several potential issues with the design.

First, she says the company she consults for, Soliculture, ships solar concentrator systems for greenhouses that can achieve up to 7 percent efficiency with reflective backgrounds. The work, says Carter, is unpublished because she is focusing on commercialization. Referring to the Dutch research, she said it’s misleading to list efficiency in the whole system, because efficiency can always be improved by adding additional silicon photovoltaic cells.

“People can make their own conclusions by going to the website,” Carter says.

She added that although photovoltaic cells function better on acrylic, it can become more expensive than glass and be more difficult to certify. Also, it is challenging to prove 20-plus-year lifetimes on the organic plastic luminescent materials; it took her team “a lot of work” to find a combination of techniques that made it possible, she writes in an email.

Carter says the size of a photovoltaic system wouldn’t have a noticeable effect on its overall efficiency, but Reinders says the main difference between her lab’s work and Carter’s work is that, because the new prototype uses smaller modules, it’s easier for photons to become concentrated because they aren’t as widely distributed across the surface. Also, there are differences in dye concentrations and in where the cells are positioned on the back of the PMMA film.

Reinders agrees that plastics are not as durable as glass—she says pieces of glass from Roman times are still found at archaeological sites—but she’s confident that they will stand the test of time. She says it’s not reasonable to expect that a plastic sheet would last 25 years. But it’s possible to make plastic headlights that can resist degradation for a period of 15 years, so a five to 10 year lifetime would certainly be reasonable as research progresses.

Reinders says she’s found that the plastics are about half the cost of glass—mainly because they are thinner. But the cost will ultimately depend on how the materials are processed, which requires further investigation. Usually plastics manufacturing is a lot faster than the glass production process.

As far as certification goes, Reinders points out that requirements in the United States could be different than those in the Netherlands. And as such, it might be difficult to meet all certification requirements with plastic. She doesn’t see any problems with electrical performance, but it is easier to scratch plastic than it is to scratch glass. This, however, could possibly be remedied by using some sort of coating.

Sayantani Ghosh, a physicist at the University of California, Merced, who was also not involved in the research, writes in an email that “once certain issues are addressed, this could potentially prove a novel way of capturing solar power in houses, with significantly lower costs” than covering a roof with silicon photovoltaic cells.

According to Ghosh, the questions that still have to be answered include whether the materials would be stable under weather conditions such as snow and rain, and how their thinness could affect their robustness. There’s also the issue of putting the cells underneath the solar concentrator tile instead of on its edge, which allows a “significant portion” of the reemitted light to escape because there isn’t a solar cell to capture it. Also at issue is whether other light harvesting materials could have a broader light absorption spectrum. Finally, she isn’t sure whether a proposed idea of mixing dyes would work in practice because the emission range of one would overlap with the absorption of another.

Reinders also admitted more work needs to be done on ensuring that it can handle the heat on rooftops. “We still can do a lot of research in this field,” she says.