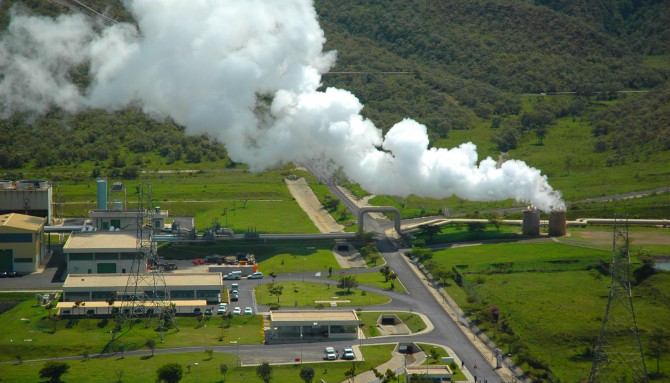 Lucy Wanjiru, aged 65, no longer has to walk over long distances to fetch water for domestic use, thanks to the Menengai Geothermal Development Project in Kenya’s Rift Valley, some 180 kilometres northwest of the capital, Nairobi. The project is co-financed by the African Development Bank (AfDB), the Kenya Government and other partners.

Wanjiru, who has resided in the area since 1980, says community members would walk for 12 kilometres in search of clean water. “We used to travel far to get water. Our children, especially girls, would even miss school as they had to allocate that time to look for water,” she said.

But not anymore. As part of their corporate social responsibility (CSR) programme, the Geothermal Development Company (GDC), which is implementing the project, has set up 10 giant boreholes, one of which is dedicated to the community. Water from the borehole is pumped into a four million-litre tank, and distributed to neighbouring households through a water kiosk. About 3,000 families and a school are benefitting from the water; livestock too. “We can now drink clean water, wash our clothes, and provide water for our animals. I now walk less than a kilometre to the water point,” said Tabitha Karimi, a community member.

The CSR activity is one of the key indirect benefits of the project. The main impact is envisaged on boosting energy supply.

Launched in 2012, the Menengai Geothermal Development Project seeks to develop a geothermal steam field meant to produce enough energy for 400 MW power generation facilities by the private sector and/or in partnership with Government. It aims at addressing Kenya’s increasing demand for power, at the same time diversifying sources of power supply by developing the country’s huge geothermal potential. The addition is equivalent to 26 percent of the country’s total installed generation capacity currently.

By providing additional installed generation capacity and injecting it into the national grid, the project will ultimately result in affordable and reliable electricity supply to more households, businesses and industries, according to Gabriel Negatu, AfDB’s Regional Director for Eastern Africa. This additional energy supply into national grid will result in increased electricity connections to benefit about 500,000 households, of which 70,000 are in rural areas. The new connections will also benefit about 300,000 small businesses.

GDC personnel are clear that geothermal energy is clean and environment-friendly, and that it is more relevant now with the biting effects of climate change. “The rise in the use of renewable energy has mainly been necessitated by increased awareness of effects of climate change and the need for countries to employ green energy,” says Engineer Cornel Ofwona of GDC.

For now, community members like Wanjiru are not only benefiting indirectly from the project through access to potable water, but are also witnessing employment of youth in the region. Between 30 and 60 youths are gainfully employed monthly, according to GDC.

The direct use technology is set to place Kenya in the same league as United States of America, New Zealand and Iceland, which have reportedly diversified the use of geothermal energy away from traditional electricity generation for growth.

With an estimated potential of over 20,000 MW, geothermal energy could provide an answer to Africa’s energy shortage, according to the United Nations Environment Programme. The use of these increasingly affordable technologies, analysts say, would in addition to increasing access to basic services, facilitate the integration and development of African rural populations.