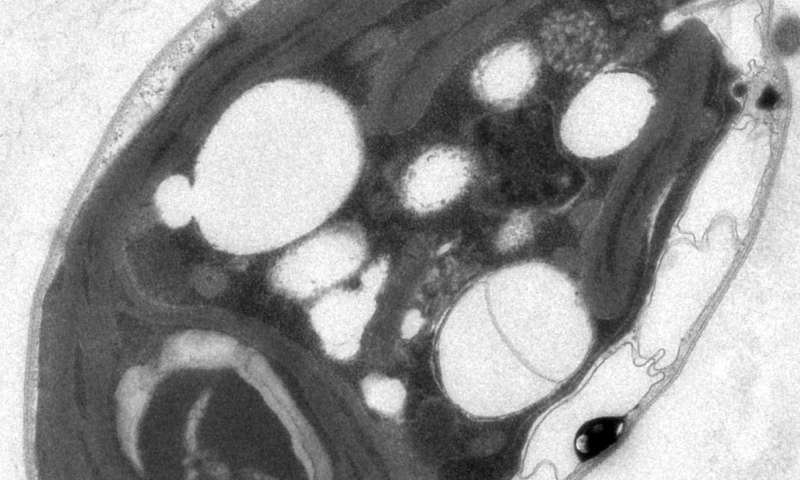 Life on earth largely depends on the conversion of light energy into chemical energy through photosynthesis by plants. However, absorption of excess sunlight can damage the complex machinery responsible for this process. Researchers from the University of Geneva (UNIGE), Switzerland, have discovered how Chlamydomonas reinhardtii, a mobile single-cell alga, activates the protection of its photosynthetic machinery. Their study, published in the journal PNAS, indicates that the receptors (UVR8) that detect ultraviolet rays induce the activation of a safety valve that allows dissipation of excess energy as heat. A second protective role is thus attributed to these receptors, whose ability to induce the production of an anti-UV ‘sunscreen’ had already been shown by the Geneva team.

The energy of the sun is converted by plants into chemical energy through photosynthesis in order to produce sugars to feed themselves. The first step of this process, which takes place in cell compartments called chloroplasts, is the capture of photons of light by chlorophyll. Although light is essential for plants, sun in excess can damage their photosynthetic machinery, thereby affecting their growth and productivity. To protect themselves, plants activate a protection mechanism when light is too intense, which involves a series of proteins capable of converting the surplus of energy into heat to be harmlessly dissipated.

“UV-B ultraviolet light is likely to cause the most damage to the photosynthetic machinery, and we wanted to know whether it is involved in activating protection mechanisms and, if so, how”, say Michel Goldschmidt-Clermont and Roman Ulm, professors at the Department of Botany and Plant Biology of the UNIGE Faculty of Science. This work, conducted in collaboration with researchers from the Universities of Grenoble and of California, was carried out in Chlamydomonas reinhardtii, a single-cell mobile alga used as a model organism.

The team of Roman Ulm had discovered in 2011 the existence of a UV-B receptor, called UVR8, whose activation allows plants to protect themselves against these UV and to develop their own molecular ‘sunscreen”. The researchers demonstrate now that this receptor activates a second protection mechanism. “When UVR8 perceives UV-B rays, it triggers a signal that induces, at the level of the cell nucleus, the production of proteins that will then be imported into the chloroplasts. Once integrated into the photosynthetic apparatus, they will help to divert excess energy, which will be dissipated as heat through molecular vibrations”, explains Guillaume Allorent, first author of the article.

In terrestrial plants, the perception of UV-B by the UVR8 receptor is also important for the protection of the photosynthetic machinery, but the underlying mechanism has not yet been elucidated. “It is crucial for agricultural productivity and the biotechnological exploitation of photosynthetic processes to better understand the mechanisms leading to photoprotection under sunlight and its UV-B rays”, says Michel Goldschmidt-Clermont. A project the Genevan team intends to pursue.