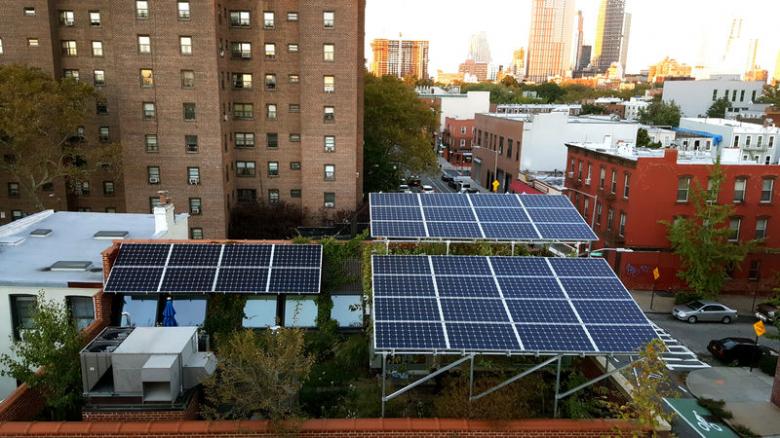 A quiet energy revolution is taking place in the homes that light up in the evening in the New York City neighborhoods of Gowanus Canal and Park Slope.

It isn’t just power plant electricity that keeps this community lit at night, but also energy generated by neighbors across the street or a few houses away, who send one another their excess production of solar power.

The experiment, called TransActive Grid, aims to soon allow homes and businesses fitted with solar panels and “smart” meters to sell spare electricity to neighbors, rather than simply give it away as they do now.

The change could herald a revolution in the way power is produced and sold not only in New York but potentially across the country and around the world, with roof-mounted solar panels joined to become neighbourhood-controlled power plants.

The idea has inspired a slew of entrepreneurs – from Australia to Finland to South Africa – to launch startups, and caught the attention of large power utilities worldwide.

The prospect of producing, buying and selling locally-generated clean energy is precisely why Gowanus Canal resident Lowell Kaplan hooked up his townhouse to the TransActive Grid earlier this year.

“It’s pretty cool,” said the 44-year-old father of two. “If I happen to produce extra why not get some local usage out of it? This is the way things should work.”

Another 40 or so solar power producers – residential buildings but also businesses and industrial buildings – have also signed up to plug into TransActive Grid’s two micro electrical grids, which span a total of about 10 street blocks.

The project is still in its demonstration phase and a relatively small undertaking so far.

But it is fueled by an idea so big it could fundamentally alter the renewable energy landscape in the United States and across the world, said Lawrence Orsini, who heads the New York startup behind the project, LO3 Energy.

Since LO3 Energy engineered the world’s first paid transaction between two people producing solar power, in April last year, the energy industry has been abuzz with talk about the internet technology behind the deal: blockchain.

Blockchain first emerged as the system underpinning the digital currency bitcoin. Applied to the energy sector, the shared electronic ledger, with no need for third-party enforcement, enables consumers producing renewable energy to trade excess energy with each other, risk-free.

“Looking at the way the utility grid runs today, and how little it has changed in over the past 100 years, it is just ridiculously antiquated,” said Orsini.

“So what we’re doing … is we’re taking the meter off the wall, just like we took the phone off the wall.”

For David Groarke, managing director at Indigo Advisory, a New York-based energy and utilities consulting firm, it’s easy to see why the notion of blockchain-backed grids has electrified the industry by changing the ground rules governing who is a seller and a buyer of power.

“To get that right is a multi-decade process,” Groarke said in a phone interview.

“But if all the pieces come together, we could see something extraordinary happen.”

For one, the multiplication of micro-grids such as New York’s TransActive Grid could cut energy losses. In current grids, as electricity travels long distances from power plants to electricity pylons to meters, some power gets lost, he said.

About five percent of the electricity transmitted and distributed in the United States disappears as it crosses long distances, according to the U.S. Energy Information Administration.

Widespread use of autonomous micro-grids also could make communities more resilient to disasters because they could continue operating if broader conventional grids went down, Groarke said.

Current grids are prone to failure when disaster strikes, a weakness that caused more than 8.6 million utility customers to lose power when Hurricane Sandy struck the U.S. Atlantic Coast in 2012.

Such potential has piqued the interest of large utilities worldwide and inspired a slew of startups to try their hand at the market.

In a 2016 survey, German energy agency DENA found more than half of the electricity industry executives who responded to its survey either planned or had already implemented activities with respect to blockchain.

Germany has been one of the most active countries experimenting with blockchain-backed micro-grids, experts say.

Altogether about 40 startups on all continents have been toiling to find innovative ways to marry energy and blockchain, according to Indigo Advisory.

In Australia, startup Power Ledger has set up a platform allowing residents of a housing development to trade among themselves solar electricity stored onsite.

And in South Africa, software company Bankymoon has been installing blockchain-backed meters in underfunded schools to let people anywhere on the planet give the schools electricity credits with donations in blockchain-based currencies like bitcoin.

Still, one major hurdle stands in the way in the United States: It is illegal for individuals to sell or buy electricity from each other without a utility’s involvement.

The sole alternative so far for solar-panel owners like Kaplan – who with his 13 rooftop solar panels expects to generate more power than he needs in the fall and spring – has been to sell their surplus to their utility at a retail rate.

The policy, known as net metering, has been adopted by 41 states including New York, according to the National Conference of State Legislatures, which tracks state laws.

Orsini, however, says he is looking into ways to help Kaplan and other members of his micro-grid legally sell their surplus electricity to each other sooner rather than later.

Though declining to discuss in detail exactly how TransActive participants will do that, Orsini said LO3 Energy is looking at three possible options. The system should be fully operational by mid-2017, a LO3 Energy spokesman said.