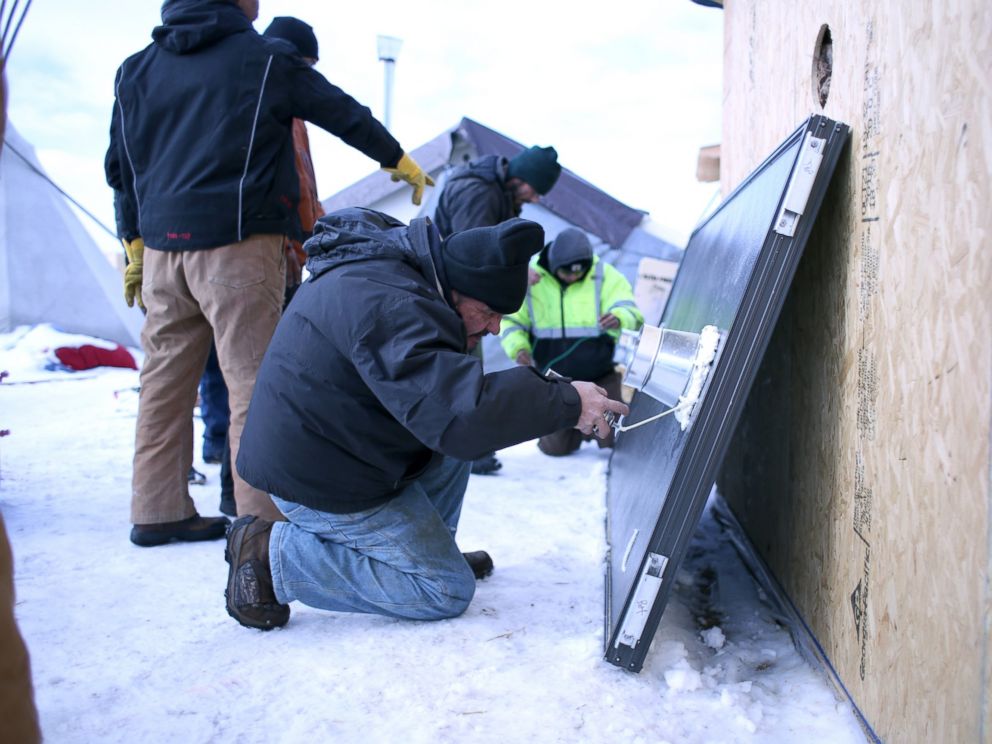 Henry Red Cloud knelt down on the snow-packed ground at the Standing Rock Reservation in Cannon Ball, North Dakota.

He didn’t seem to mind the frigid cold as he used his bare hands to secure an outlet to a solar air heater, one of 11 he installed one December day at the Oceti Sakowin Camp to help protesters there stay warm as temperatures dipped below zero.

“They’re outside all day,” Red Cloud, 57, later told ABC News in an interview. “And we still have 120 days of winter left here in the Northern Plains.”

Thousands of Native Americans, environmental activists and their allies have camped out near the Standing Rock Reservation for months in protest against the Dakota Access Pipeline. The Standing Rock Sioux Tribe in July sued to block the four-state crude oil pipeline project, claiming it was never meaningfully consulted before construction began.

The protesters, who call themselves “water protectors,” argue that the nearly completed pipeline will threaten the reservation’s water supply and traverse culturally sacred sites. They also cite an 1851 treaty that they say specifies that the land in question was designated for Native American tribes.

Kelcy Warren, CEO of Energy Transfer Partners, the Texas-based firm that’s building the pipeline, has said that “concerns about the pipeline’s impact on local water supply are unfounded” and “multiple archaeological studies conducted with state historic preservation offices found no sacred items along the route.”

The push to block the 1,170-mile pipeline has ignited tension between the “water protectors” and local authorities, and it has become one of the largest Native American demonstrations in decades. Many of the protesters left the camp after the Army Corps of Engineers, which reports to the Department of Defense, announced Dec. 4 that it will not approve an easement needed to permit the controversial pipeline to cross under Lake Oahe.

Although a major victory for the protesters, the decision may not have permanently defeated work on the controversial pipeline as the Obama administration enters its final days in the White House. President-elect Donald Trump has said he supports finishing the Dakota Access Pipeline, which crosses North Dakota, South Dakota, Iowa and Illinois.

Many protesters have left since the Army’s announcement, but hundreds still remain and have erected teepees, tents and other kinds of shelters to keep warm this winter atop the frozen, snow-covered ground.

ABC News, on Dec. 21, photographed Red Cloud’s fifth return visit to the camp where he continued installing various systems providing heat, light and electricity from renewable energy sources, including solar and wind. The founder and owner of Lakota Solar Enterprises, a Native American-owned and operated renewable energy firm in South Dakota, also trained hundreds of protesters on how to install the systems themselves so they can live sustainably and embrace green technology.

“We need to utilize the sun and start coexisting with the earth and the sun and the wind,” he said. “We can do it. Our ancestors did it.”

Red Cloud, a member of the Oglala Lakota Tribe on the Pine Ridge Reservation in South Dakota, said he took an interest in renewable energy in hopes of helping Native American communities like his own that are suffering from high unemployment, poverty and the effects of climate change.

About 97 percent of the population on the Pine Ridge Reservation live below the poverty line, and about 90 percent are unemployed. Thousands of homes there lack electricity, adequate heating, clean water and sewage systems, according to data from the American Indian Humanitarian Foundation.

“It’s creating an economic opportunity for individuals here,” Red Cloud told ABC News. “And we’re bringing awareness and helping tribes reach energy independence, because we have the resources. We have tremendous sun and a lot of wind.”

In 2014, Red Cloud was one of 10 people honored by Obama as “Champions of Change” for driving policy changes at the local level to expand energy choices for Americans, grow jobs and add new clean energy to the grid.

“I found myself in D.C. at the White House having lunch there with the president,” Red Cloud laughed.

On the vast Pine Ridge Reservation, which spans over 2 million acres, Red Cloud and his partners are also building sustainable homes using natural materials, planting thousands of trees to combat deforestation and are cultivating organic farms with alternative energy sources.

Now, the father of 17 and direct descendant of Lakota war chief Red Cloud is bringing these green concepts to the Standing Rock Reservation to empower the tribes fighting the pipeline.

“We’re going to make history together and start to move ourselves away from fossil fuels. It can’t happen overnight,” he told ABC News. “We need to move forward together.”