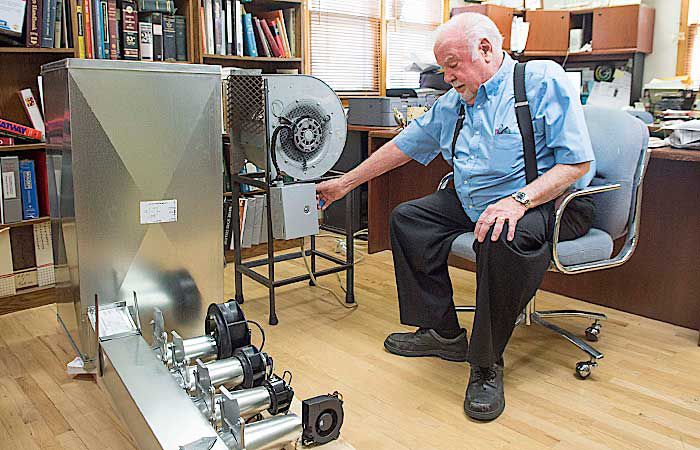 Leroy Stebbing has an idea that could take the wind energy industry by storm.

At the very least, the Norfolk engineer’s creation has the potential to change the landscape of wind farms around the country.

Stebbing — who owns Stebbing Engineering — has applied for a patent on a design for a wind turbine system that could make obsolete the current long-blade propeller design currently found on wind farms. He hopes to pique the attention of industries that might be willing to give the design a chance.

“I keep thinking somebody — Vulcraft, Lindsay, any one of those kinds of places — could see the possibilities of using something like this,” he said of his design.

“If the wind is blowing from the north, you only open the shutters that are on the north side of the building. The other three sides are closed,” he said.

The wind blows through the open shutters, down the shaft and is directed horizontally through ducts that vary in size to better control air flow. The controlled air then is used to drive various sizes of impellers.

By the time the air gets to the impellers, Stebbing said the shaft could be decreased to as much as 10 percent of its original size, which allows more pressure than what’s available at the top.

“It’s like a garden hose,” he said. “If it doesn’t have a nozzle on it, (the water) just falls out of the end of the hose. Put a nozzle on it, you can squirt that water 30 to 40 feet because there’s a lot more pressure. It’s the same idea.”

Stebbing said the ability to control the air flow gives his design a big advantage over the traditional wind turbine design.

The elimination of large propeller blades also means no bird strikes and noise is reduced to the hum of a centrifugal fan, he said. It also would eliminate the need to transport large wind turbine components for construction because the impellers used in his design are much smaller, he added.

The system would be ideal for a factory that needs to provide power to a lot of large machinery, he said. In fact, Stebbing said one of the biggest benefits he sees is the elimination of the need for heavy transmission lines to carry energy from the wind farm to specific consumers — large factories, for example — because the turbines can be built near or on site.

“I don’t have a big propeller flipping around up there,” he said. “It would be like a city building. … If the conditions are right, I can build it close to the consumer and still have it high enough to get the wind.”

Stebbing — who holds other patents for various inventions, including one for a method of burning scrap tires instead of coal to melt steel — said his idea for the new wind turbine system came from the experience he’s acquired working in steel and mechanical engineering fields over the years.

He grew up in Baltimore and came to the Norfolk area in 1973 to “turn a corn field into a steel mill.” After his involvement in establishing Nucor and Vulcraft in Norfolk, Stebbing eventually began working for the mechanical contracting company, Kinning & Reil, where he gained experience working with heating, ventilation and air conditioning.

“Ducts — big ducts, small ducts and things like that,” Stebbing said. “I know about how they work.”

It was that experience that made him wonder how much more efficient wind farms could be with modified system, he said. A small prototype of his design sits at his house. Stebbing said he believes the invention will eventually replace the traditional wind turbines, and he’s excited to see what could happen with it in the future.