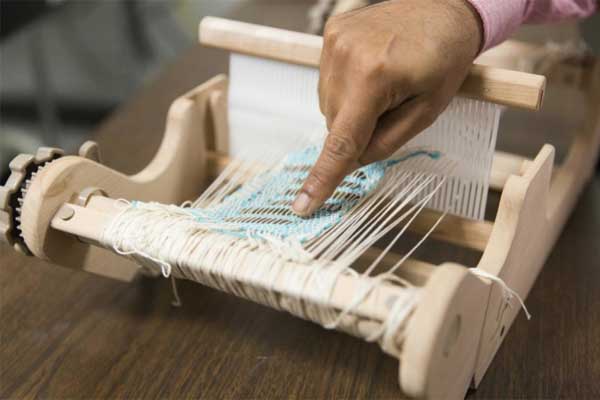 Marty McFly’s self-lacing Nikes in Back to the Future Part II inspired a UCF scientist to develop filaments that harvest and store the sun’s energy.

The breakthrough would essentially turn jackets and other clothing into wearable, solar-powered batteries that never need to be plugged in. It could one day revolutionize wearable technology, helping everyone from soldiers who now carry heavy loads of batteries to a texting-addicted teen who could charge his smartphone by simply slipping it in a pocket.

“That movie was the motivation,” Associate Professor Jayan Thomas, a nanotechnology scientist at the University of Central Florida’s NanoScience Technology Center, said of the film released in 1989. “If you can develop self-charging clothes or textiles, you can realize those cinematic fantasies — that’s the cool thing.”

The research was published Nov. 11 in the academic journal Nature Communications.

Thomas already has been lauded for earlier ground-breaking research. Last year, he received an R&D 100 Award — given to the top inventions of the year worldwide — for his development of a cable that can not only transmit energy like a normal cable but also store energy like a battery. He’s also working on semi-transparent solar cells that can be applied to windows, allowing some light to pass through while also harvesting solar power.

His new work builds on that research.

“The idea came to me: We make energy-storage devices and we make solar cells in the labs. Why not combine these two devices together?” Thomas said.

Thomas, who holds joint appointments in the College of Optics & Photonics and the Department of Materials Science & Engineering, set out to do just that.

Taking it further, he envisioned technology that could enable wearable tech. His research team developed filaments in the form of copper ribbons that are thin, flexible and lightweight. The ribbons have a solar cell on one side and energy-storing layers on the other.

Though more comfortable with advanced nanotechnology, Thomas and his team then bought a small, tabletop loom. After another UCF scientists taught them to use it, they wove the ribbons into a square of yarn.

The proof-of-concept shows that the filaments could be laced throughout jackets or other outwear to harvest and store energy to power phones, personal health sensors and other tech gadgets. It’s an advancement that overcomes the main shortcoming of solar cells: The energy they produce must flow into the power grid or be stored in a battery that limits their portability.

“A major application could be with our military,” Thomas said. “When you think about our soldiers in Iraq or Afghanistan, they’re walking in the sun. Some of them are carrying more than 30 pounds of batteries on their bodies. It is hard for the military to deliver batteries to these soldiers in this hostile environment. A garment like this can harvest and store energy at the same time if sunlight is available.”

There are a host of other potential uses, including electric cars that could generate and store energy whenever they’re in the sun.

“That’s the future. What we’ve done is demonstrate that it can be made,” Thomas said. “It’s going to be very useful for the general public and the military and many other applications.”