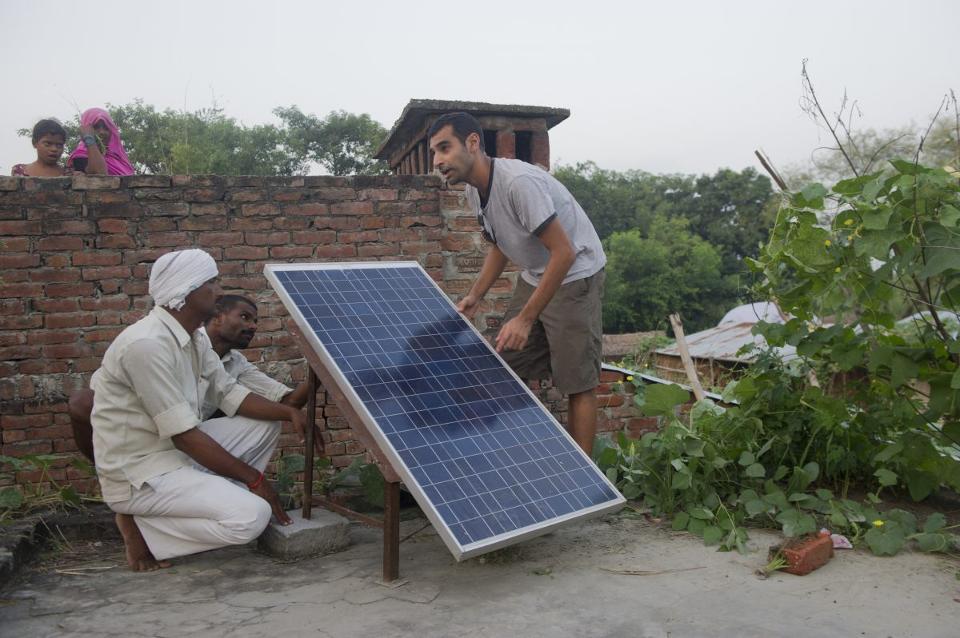 Access to power in India is not a given. Mera Gao Power (MGP), however, is able to offer customers two solar powered lamps and a mobile phone charger for less than a dollar per week, powered by renewable energy sources as opposed to kerosene.

Jaisinghani is among the generation of solar energy entrepreneurs is finding faster, cleaner and more economical route to universal access to power. The idea behind such enterprises is to create a business model that will help millions in India to leapfrog the coal-dependent grid straight to renewable energy sources.

As the third-largest emitter of greenhouses gases and its economic progress intertwined with the energy sector, increasing renewable energy is vital to India’s sustainable growth story. Simultaneously, lighting up homes of over 300 million people living in total blackout is important as well.

To this end, India has invested more than $14 billion in generating 40 gigawatts of clean energy, and aims to exceed the renewable energy targets, set in Paris in 2015, by nearly three years ahead of schedule. It plans to have 57 % of its total electricity capacity from non-fossil fuel sources by 2027. The Paris climate accord target was 40% by 2030.

Winner of Solar For All 2016, a contest for innovative community solar electrification solutions organized by a German foundation, MGP has been providing night-time lighting to over 150,000 people in 1,500 off-the-grid villages in northern Indian state of Uttar Pradesh. MGP’s single micro-grid, costing nearly $900, serves 30 households. This social enterprise is funded by USAID and French electric utility Engie.

While MGP brings light into people’s lives, Prema Gopalan and Ajaita Shah are training women to be clean energy leaders.

SSP, winner of the UN Climate Award 2016, has teamed these women up with local manufacturers of solar lanterns and smokeless cookstoves. In turn, these women support rural communities to adopt clean energy products and services. “Our Sakhis have reached over 1 million people in Maharashtra and Bihar, They are not only ‘last mile’ distributors but also future leaders of clean energy,” says Gopalan.  To facilitate peer learning and knowledge exchange, SSP has leveraged the women network to create a clean energy hub in Latur, Maharashtra.

Similarly, in sun-drenched Rajasthan, Shah, through her solar firm Frontier Markets (FM), tackles the everyday struggle of unreliable electricity and hazardous cooking practices of rural households. She trains locals to sell and service affordable solar energy products, turning the poorest of the poor into clean energy entrepreneurs.  “Our target is to reach more than 400 million households,” says Shah. “Since 2011, FM has sold over 100,000 zero-carbon lighting units, created 500 retail points and 200 women entrepreneurs.   FM also trains women to sell solar solutions to other women. “The initiative aims to give them the opportunity to be clean energy leaders, and earn extra money for their families,” adds Shah.

By 2035, oil company BP estimates that India’s energy demand will grow 121%. In such a scenario, it is important for India not just to hit its renewable energy target, but to integrate efficiency and maximize benefits. Filling this gap is Siddharth Malik of Megawatt Solutions (MS), and the firm provides concentrated solar-thermal (CST) solutions to manufacturing companies in and around Delhi.

His experience in Con Edison in New York and energy project finance in the U.S., he says, made him realize the “huge energy gap” between the goals set for carbon emission reduction and how energy is consumed in India. CST technology, Malik claims, can reduce up to 50% fossil fuel consumed in industrial heating, and allow conventional solar systems to generate up to 30% higher output by use of solar tracker systems.