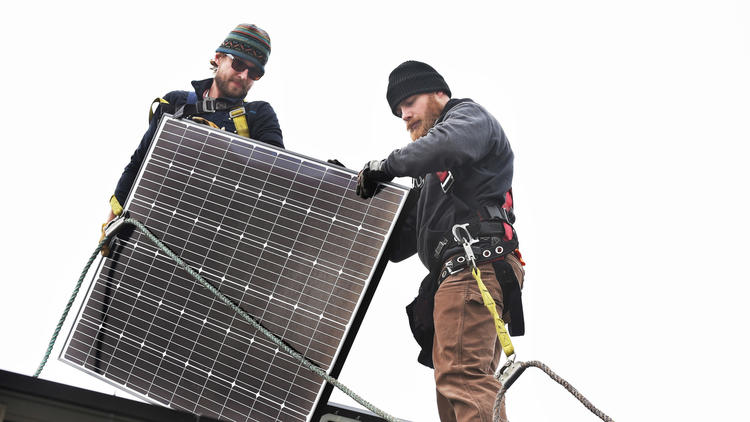 Matt McDonough and his crew rolled up to the Brooklyn Park home around 8 a.m., unloaded their ladders, harnesses and tools, and got to work tiling another roof with solar panels.

It was a typical workday for the four-man team. They don’t talk much as they check electrical connections and begin hauling equipment up to the roof of the single-story 1920s home because, after hundreds of installations, they have it down to a science. The job will take a day, maybe two, and when it’s done, they’ll be on to the next one.

“There’s never a time we don’t have work,” said McDonough, who leads one of 10 installation crews at Solar Energy World.

Business is booming for Solar Energy World and other solar companies in Maryland, as sun-sourced energy becomes more affordable and accessible. Attracted by solar-friendly policies and mounting demand, solar companies are flocking to the state and hiring in droves. Maryland added 1,160 solar jobs in 2016, a 27 percent jump from the previous year, bringing the industry’s employment to more than 5,400, according to an annual solar jobs census by the Solar Foundation.

The U.S. solar market nearly doubled last year, with production capacity growing 95 percent to 14,626 megawatts, according to a preview of the upcoming U.S. Solar Market Insight report, a collaboration between the Solar Energy Industries Association and GTM Research. While residential capacity grew steadily, the biggest gains last year came in utility installations, many of them made to address state rules.

Across Maryland, from the Eastern Shore to Harford and Howard counties, solar companies have installed acres of solar arrays on farmland to sell power to utilities and others.

But these big projects don’t drive employment like rooftop installation and maintenance does, according to the Solar Foundation, a research and education nonprofit organization.

“We’re constantly interviewing,” said Geoff Mirkin, CEO of Solar Energy World, “so if and when the next opening comes up, we’re ready.”

The Elkridge company’s revenue nearly doubled to $31 million in 2016, up from about $16 million in 2015, and expects more growth this year, which means more hiring. Mirkin, who has 93 employees, wants to add two more installation teams, for a total of 12, by the end of March and is considering establishing new field offices to expand the company’s service area beyond the Baltimore-Washington region.

SolarCity, one of the nation’s largest full-service solar companies, is expanding its service to customers of Easton Utilities, along Maryland’s Eastern Shore, this year.

The company has five offices and more than 800 employees in Maryland, making the state one of SolarCity’s larger markets, a spokesman said.

Solar companies looking to grow face a unique hiring challenge: How to find workers with experience in a relatively new line of work.

“The solar industry is growing so quickly, it doesn’t have a tremendous pool of qualified candidates to choose from,” said Andrea Luecke, the Solar Foundation’s president and executive director. “They’re really hiring a lot of people by looking for basic competencies, people who have transferable skills and are willing to put in the time to help the company grow.”

That’s the case for Direct Energy, a Texas company that established its solar business by acquiring Howard County-based Astrum Solar in 2014. This year, the company expects to add up to 15 workers in Maryland to its Mid-Atlantic division, which employs between 60 and 70 solar employees in the region. Another 100 support staff are based at Direct Energy’s solar headquarters in Columbia.

“The vast majority of people we hire, it’s their first job in solar,” said Anthony Bramante, Direct Energy’s head of residential solar for the Mid-Atlantic division.

Bramante and Mirkin, of Solar Energy World, said they look for workers with experience in construction or electrical work who can be trained in the intricacies of solar installation.

Ethan Goddard had just graduated St. John’s College with a liberal arts degree when he heard a radio ad for Solar Energy Services and decided to apply for an installer job. Two years and a few promotions later, he’s a commercial project manager at the Millersville company.

“There was a certain point after I got promoted to a crew leader I remember thinking, ‘I might have stumbled on a career,'” said Goddard, 25, of Annapolis. “It was something I never thought would happen.”

McDonough, the Solar Energy World installer, built custom doors for 10 years before making the move to solar. He’d heard the pay was better and liked the idea of doing something “for the better good,” he said.

Workforce development programs in Maryland have honed in on the solar industry’s appetite for workers and openness to on-the-job training.

Civic Works, a community services organization in Baltimore, last year launched a three-month solar job training program for city residents who have struggled in the past to secure jobs.

“We just saw that the industry was exploding and there were a ton of job openings,” said Evie Schwartz, an associate director of outreach and production. “The companies were growing, but there was a skills gap.”

The program, run through the nonprofit’s Baltimore Center for Green Careers, partners with local solar companies to include two-month apprenticeships. The program also covers basic construction skills and social skills, and guarantees job placement for all graduates.

Civic Works is expanding the program to include career development for solar employees, to help them advance professionally.

It also plays into an initiative Baltimore launched last year to bring solar panels to the rooftops of low-income city residents. The state Public Service Commission finalized regulations last week for community solar programs, through which a group of homeowners or renters can share the costs and benefits of a solar installation.

Betony Jones, associate chair of the climate program at the Center for Labor Research and Education at the University of California-Berkeley, cautioned against workforce development programs that focus exclusively on solar skills. Participants would be better off learning solar as part of a broader skill set that they can apply to construction or electrical jobs outside the solar field, she said.

“When you’re just investing in solar training, it can almost be a dead-end job,” Jones said. “It’s a good entry-level job, but you kind of hit a plateau as a solar installer if all you know is solar.”

While some solar businesses can’t seem to hire fast enough, others said last year wasn’t the boom previous years have been because of growing competition and the deflating effect that has had on prices for renewable energy credits, a key incentive for homeowners and businesses to invest in solar panels.

“There’s definitely more demand for solar, but there’s a lot more competition, as well,” said Rick Peters, president of Solar Energy Services. “We’ve been a bit of a victim of our own success.”

Peters said the drop slowed sales and Solar Energy Services had to lay off a few workers, though they have been hired back as business picked up again.

He said he isn’t sure whether the state’s mandate to increase the amount of renewable energy used will make much of a difference, but is hopeful it will help.

Others credit the state’s policies with bolstering solar businesses.

Sunrun, a San Francisco-based residential solar company has done system installation and leasing in Maryland since 2011, but opened its first field office in the state in December 2015.

The company spent much of last year hiring, and now employs 50 people at its Linthicum Heights office, said Andy Newbold, a Sunrun spokesman.

“The bottom line is Maryland set up an environment that was conducive to solar businesses coming to the state,” Newbold said, “and we’re obviously not the only ones selling here.”