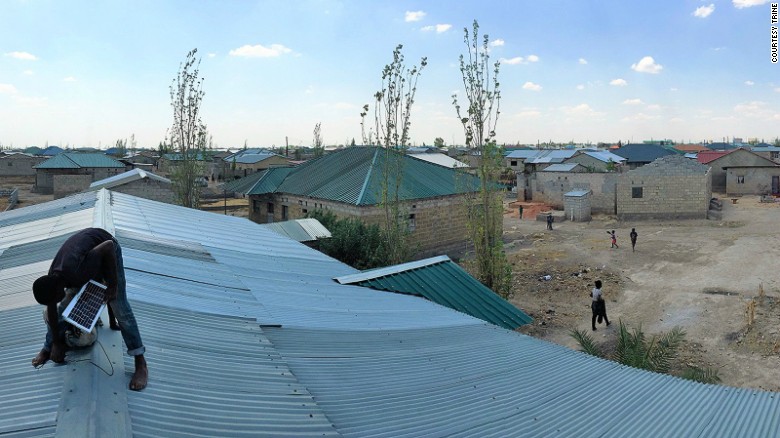 Out of ideas for stocking fillers? A Swedish tech start up has a suggestion: why not give those in need the gift of electricity?

TRINE, which connects investors with solar power entrepreneurs in East Africa via its website, has launched a Christmas present campaign.
A voucher from TRINE can be invested in a solar power project in Africa, with an expected return of around 6% for the recipient.
The investments start at $26.5 (€25) and the sky is the limit. So far, the company has raised $354,000 (€333,000) towards seven projects in Kenya, Tanzania, Uganda and Zambia.
But it’s not just gift vouchers. Launched in February 2016, the platform is open to large and small investors alike.
Co-founder and CEO Sam Manaberi says the idea stems from his own experience of a lack of opportunity for Europeans to invest sustainably.

A demand for funds

The aim is to open up business opportunities by connecting people with disposable income to African entrepreneurs, called “solar partners”, who supply solar power kits to people who live in rural, off-grid areas.
“Currently in Africa, there are great entrepreneurs, a huge demand and proven technology to deliver these sorts of projects, but commercial finance is in short supply,” Manaberi says.
Investors can expect a return on their investment once the entrepreneurs begin their repayment, which can take between six months and two years, according to the company.
TRINE makes no bones about being a for-profit venture, and the company motto is enshrined the name which meant triple, threefold or trinity, in Middle English.
“It reflects and symbolizes our triple bottom line thinking, where our impact is threefold — people, planet, profit,” Manaberi says.
Different from charitable giving, this approach will benefit all three sides, says Manaberi, formerly Director at Bosch Solar Energy North America. “The model is dependent on this mutual relationship and can be extremely effective when everyone pulls in the right direction.”

The company wants the investments to help local economies become more self-sustainable and also provide a solution to the 1.2 billion people worldwide who lack access to electricity, 95% of which are in Sub-Saharan Africa and developing countries in Asia.
“It all comes down to sustainable development across all levels and the end goal of achieving universal access to energy,” Manaberi says.
The model could mean good business for TRINE too, as they lend the money to the entrepreneurs with interest.
“The solar partners pay a 5% arranger fee for the successful funding of their project, and between 10-16% interest rate on a declining balance of the loan.”
The design and price of the solar kits varies according to the solar partners and the project. The end user typically pays a monthly fee for the kit via a smartphone payment.
Powered by either a micro-grid or a small individual solar panel placed on the roof, the system is used for lighting and powering appliances, cell phones and TVs.
The company hopes the kits will replace kerosene lamps, which may cause fires and health risks such as burns and poisoning from fuel ingestion.
TRINE has attracted attention from the likes of the WWF Climate Solver and COP 22, in Marrakech in November, where they were invited to give a talk about the venture.

The risk with investing

However, investing is rarely free of risk, and TRINE is no exception.
With all projects still being implemented, the solar partners are yet to begin making repayments, though they are due to start trickling in within the the next few months, according to the company.
Some projects are supported by investment protection from UK Aid, such as one in Tanzania, run by Solaris Tanzania, formerly Eternum Energy, which raised $53,000 (€50,000).
With 27 employees with 650 customers currently using their solar kits, and current investment is estimated to add another 2,000 customers. “As a small company, we found it difficult to get commercial credit from banks,” says Eternum CEO and co-founder Siten Mandalia.
“So what TRINE has done is create this platform which connects investors who want to get into this industry and provide that capital gap that is missing for start ups like us.”
Through Mandalia’s company, Tanzanians can buy a 20 watt system for $1.80 per week over three years.
TRINE’s solar partners are not the only ones selling solar power kits for monthly repayments in countries like Kenya and Tanzania. Among larger players are M-KOPA Solar, who launched a solar-powered TV earlier this year.

The rise of crowdfunding

TRINE has global ambitions, but for now, the platform is open to people in countries in the European Economic Area (EEA), with more projects across Africa in the pipeline.
Globally, interest in crowd-investment is growing fast. The market generated an estimated $2.1 billion globally for start ups in 2015, with the World Bank predicting it will skyrocket in developing countries over the next 10 years.
Manaberi thinks crowdfunding ventures like TRINE are particularly well-suited for Africa. “Our model enables people to make a real impact, no matter who they are or what they do.”