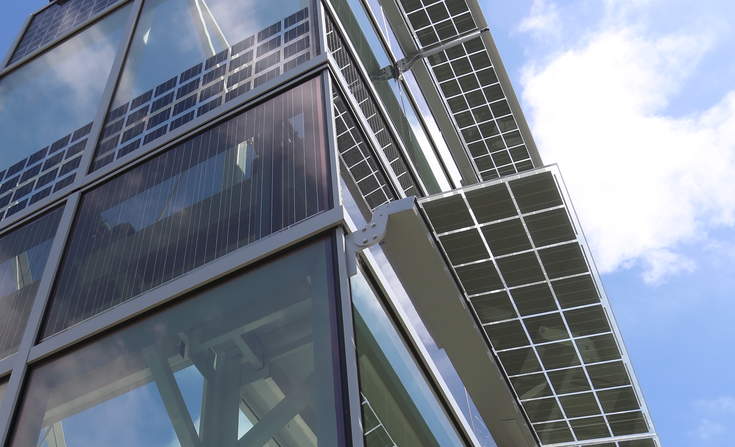 Since the beginning of the modern architectural era, humankind has dreamed of self-sustaining buildings that generate their own power. Futurists of the early 20th century looked ahead to the days when the sun would power our homes and commercial buildings and we would be transported to and from our workplaces in flying cars. Unlike the overly ambitious estimates concerning personal air transportation, today the concept of a solar-powered building is neither remote nor unachievable.

In fact, over the past six years in America, solar power has exploded into the energy sector with the kind of industrial vigor not seen since the 1950s. In 2010 America had less than 1 gigawatt of deployed solar generation. Today that number has ballooned to over 30 gigawatts and continues to increase at an astonishing rate of growth.

This enormous upswing in solar generation is due in large measure to a precipitous decrease in the cost of solar generating materials. In 2006 a solar cell cost between $3.75 and $4.25 per watt. Today that same solar cell is 20 percent more efficient and costs about $0.35 per watt. Significant increases in demand have spurred the growth of production capacity and economies of scale have propelled the solar energy markets at unprecedented rates. A dramatic increase in the cost of electricity in many parts of the country in combination with a generous investment tax credit provided by the federal government have provided further motivation for investment in solar generation.

In addition to these market propellants, a vast network of solar technicians and solar suppliers also has sprung up in the new American energy market. Thousands of installers and electrical contractors are fully invested with solar skills and technology and every major electrical supply house in the nation provides a comprehensive line of electrical management systems to support solar energy integration. Solar energy is fully embedded in the National Electrical Code and utility-grid connection of solar generators is widely permitted.

In short, solar technology is now settled science and has become an accepted part of our mix of energy resources in America. There is still nearly unlimited room for growth but it is safe to say that solar energy is here to stay.

Resting on the foundation of this extraordinary American solar success story sits the framework of the next generation of solar technology, architectural solar or as it is known in the industry, building integrated photovoltaics (BIPV). This market segment is the logical progression of solar energy generation and is ripe for exponential growth.

Architectural solar is defined as a BIPV component, which forms part of the structure of a building. It is not a solar panel attached to a structure but rather a typical building component such as a window, spandrel panel or other cladding component adapted to produce electricity. If a building integrated photovoltaic component were to be removed from a structure, the resulting gap in the façade would be filled with a substitute building material.

Unlike traditional solar energy generation however, architectural solar generation is quite a bit more complex and depends on the cooperation and collaboration of numerous stakeholders. The success of architectural solar relies heavily on buy-in from building-owners, architects, construction companies, glaziers, building envelope suppliers and civil electrical contractors. Furthermore, until very recently, there has been no supply chain to support architectural solar in America. There have been boutique BIPV suppliers; however, none significant enough to be embraced by the mainstream construction market sufficiently to create a real market.

Most significant, the construction industry has been reluctant to fully embrace architectural solar because it was uncertain of the reliability of the warranties provided by the nascent industry. Over the past few years, the birth of the solar energy market often has been turbulent and uncertain, with many players failing to rise due to rapidly changing market conditions. To sum it up in a phrase coined by a construction company executive: “How can I accept a 20-year warranty from a company that has only been in business for six months?” This sentiment has been echoed by many construction industry professionals and exposes the fact that they are looking for integrated solutions from legacy players, not start-up companies without measurable track histories.

For this reason, companies such as California-based Walters & Wolf Glass Company have embraced this nascent architectural solar market and are bringing their considerable resources, reputation and expertise to it. Major construction companies and building developers will be able to incorporate architectural solar into new projects with the confidence provided by a venerable 40-year building envelope provider. Walters & Wolf can offer one-stop shopping for their clients and provide the confidence of supply chain reliability, technical excellence and warranty security.

Furthermore, the opening of this market has created tremendous opportunity for the new development of creative and unique architectural solar concepts. One such developer of this new architectural solar technology is Solaria Corporation of Fremont, California. Solaria has developed groundbreaking photovoltaic technologies that are ideal for use in building integrated photovoltaic components. Solaria’s unique solar cell singulation technology has allowed it to develop an architecturally beautiful vision glass that can be used in typical window openings providing a see-through window that generates electricity. Solaria’s other architectural solar products such as spandrel and solar cladding are equally aesthetically appealing and are creating a great deal of buzz in the architectural community.

Going forward, as more players enter this market segment, it is expected that dramatic new breakthroughs will be made in architectural solar technology. As the new technology takes root, architects will be encouraged to evolve their building designs to incorporate more building integrated photovoltaic components. As a result, it is expected that buildings will generate incrementally greater amounts of electricity.

Over the next decade, it is expected that architectural solar will become a standard practice on all new construction and soon the idea of erecting a new structure without it will be architectural heresy. Once the full power of the shared imagination and technical capabilities of this robust new market are brought to bear, we finally will realize the dream of those visionaries of yesteryear. Soon we will look out over the cityscape through the windows of our cars as we fly to work and wonder how we ever lived in a world that did not draw its energy from the sun.