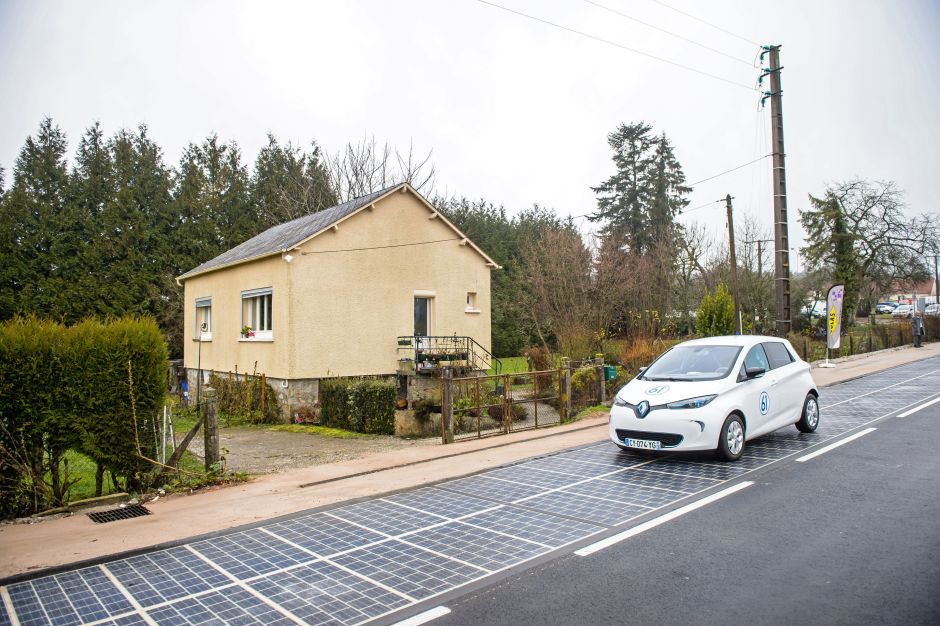 At this rate, just about every man-made surface there is could be covered in solar panels in the future.

Yesterday, Tourouvre-au-Perche, a small town in northern France, opened what is likely the first road paved in solar panels in the world, the Guardian reported. The road is roughly 1 km (0.6 miles) long, with one lane covered entirely in a patchwork of small solar cells that look rather like bathroom tiles, or a very dirty version of the road in the Wizard of Oz.

The panels are coated in a special silicon film that helps protect them from the weight of trucks. The road will likely see around 2,000 vehicles a day, passing through the town of roughly 3,400 residents.

The road was opened by France’s environment minister and former presidential candidate Ségolène Royal, who said that she would like to see the solar panel-paving installed on thousands of kilometers of French roadways. As the Guardian points out, this part of France, Normandy, isn’t exactly known for its sunny weather, receiving around 44 days of good sunshine a year on average. Royal and the French company behind the road, Wattway, are hoping to see over the next two years whether the road can generate enough electricity to power the town.

It’s the not the first paved solar-panel project in the world—that honor went to Dutch company SolaRoad in 2014 with its solar-powered bike path—but it’s possible that this road will suffer the same issues. SolaRoad’s bike path can generate roughly 3,000 kilowatt-hours of power, but the estimated cost of building it was equivalent to paying for 520,000 kilowatt-hours’ worth of power.

France’s project was not cheap: The short stretch of roadway cost about €5 million ($5.2 million) to build. It may not prove to be the most cost-effective use of capital either. Solar panels are more efficient when they are tilted at an angle toward the Sun, rather than flat to the ground, and the road’s construction cost may well be greater than the amount of energy it can produce. “We have to look at the cost, the production [of electricity] and its lifespan,” Jean-Louis Bal, the president of the French renewable energy union SER, told the Guardian. “For now I don’t have the answers.”

Wattway aims to lower the cost of installing paneled roads as it builds more of them, and although the cost-effectiveness is in question now, it’s a novel use of otherwise wasted space. Many buildings around the world are covering their roofs with solar panels, in an effort to cut down on energy costs: Apple’s new campus is awash in solar paneling, and is aiming to be a nearly self-sufficient building, and Elon Musk’s Tesla plans to bring shingle-shaped solar panels to homes around the world in the near future. Solar panels also grace trash cans, tents, and planes, so perhaps it won’t be that long before they’re ubiquitous enough on our infrastructure to drive costs further down.