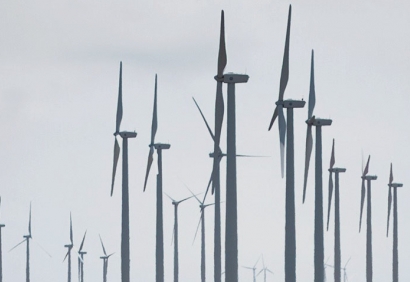 A wind turbine spinning its blades in a valley in southeast India asks a turbine on a plain in Iowa if it should slow down or speed up its rotation. Sound like the stuff of science fiction?

It’s not, according to GE’s VP of Software Research Colin Parris. GE has been developing software, sensors and networking technology that enable wind turbines to talk to each other, not only within the confines of a particular wind farm, but even across the planet.

Such technology, and others like it, could help boost wind farm capacity, lower costs of operating wind farms, and potentially help wind energy compete more effectively with fossil fuel power. “A machine consulting with another machine…now that could be transformational,” said Parris, in a recent interview.

Much of the success of wind energy around the globe has resulted from larger and lower-cost turbines that can produce more power, combined with increasingly savvy and maturing wind developers and financiers, as well helpful subsidies from governments. However, computing tech can also contribute, adding smart intelligence to machines, helping them operate more efficiently, and alerting developers about needed maintenance.

According to some research, these types of technologies could add a 4 percent to 8 percent increase in annual energy production of a wind farm. That could be a lot on a large wind farm with hundreds of megawatts of capacity.

GE, one of the world’s largest wind turbine makers, has built a number of computing and data-dependent technologies that are working on what some call “wind orthodontics.”

Wind energy forecasting: Predicting when and how much the wind will blow is a major issue for power companies and grid operators. Because solar and wind energy are variable, that makes it harder to predict just when these resources will generate energy, compared to natural gas, coal and nuclear plants. If a cloud drifts over a solar field, or the wind suddenly picks up, the energy produced can drop or soar significantly.

GE isn’t the only company that has invested in energy prediction engines. IBM has its own wind and solar forecasting systems. GE is also looking at doing solar forecasting as well, but currently isn’t offering the tech commercially.

Wind farm optimization: If you have a wind farm of, say, 50 or 100 turbines, the turbines in the front of the pack might access more wind flows, while blocking some of the wind turbines in the back. To overcome this issue, GE connects wind turbines with wireless networks and control devices and uses data and software to adjust the angle and speed of blades and rotors so that the most wind energy can be produced by the turbines collectively.

Called “wake management,” the computing tech can deliver 0.5 percent to 2 percent more annual energy production from wind turbines. While that might sound like a drop in the bucket, at a big farm, it adds up.

According to consultants SgurrEnergy, some wind companies are also using lidar technology to ensure that the plane of a wind turbine’s rotor remains perpendicular to the wind, enabling it to access as much energy as possible.

Wind farm maintenance: When a wind turbine breaks down, it’s a big deal. Turbines are commonly hundreds of feet tall, and when they become inoperable, that sometimes means that a worker has to go to the top and check out what’s wrong. And when the blades of a turbine aren’t turning, electricity isn’t being produced, which means money isn’t being made.

GE has built algorithms based on historical wind turbine activity and real-time wind energy data that can predict when wind turbines need to be maintained and alerts developers to when they could break down. The industry calls it “predictive maintenance.”

The American Wind Energy Association says that in 2011, close to $40 billion worth of wind turbines in the U.S. went out of warranty, meaning the owners of the wind turbines will need to invest in their maintenance directly. Algorithms could help reduce upkeep costs.

Drone inspections: Drones could play a new role in helping wind developers maintain turbines, and GE has already been experimenting with such technology.

Drones, carrying cameras, can fly up to the rotor and blades and inspect turbines to see if anything is out of place. Those cameras could use computing vision software to detect failures, rust, or corrosion.

Talking wind turbines: There are a lot of reasons why wind turbines might want to talk to each other across a farm, across a state or across the planet.

An older wind farm that’s been generating electricity for years could give advice to a newer, younger farm that’s operating under similar conditions. Or a wind turbine at the front of a pack could let its fellow turbines at the back of the pack know it’s adjusting its blade and rotor angle or speed.

“We have wind turbines talking to each other, and they can ask each other questions about failures, wind direction and security, or about collaborating more effectively,” explained GE’s Parris.

Such communication technology would require the turbines to be networked with wireless connections, and use sensors and software to let other turbines know how they’re operating and how they should operate
.